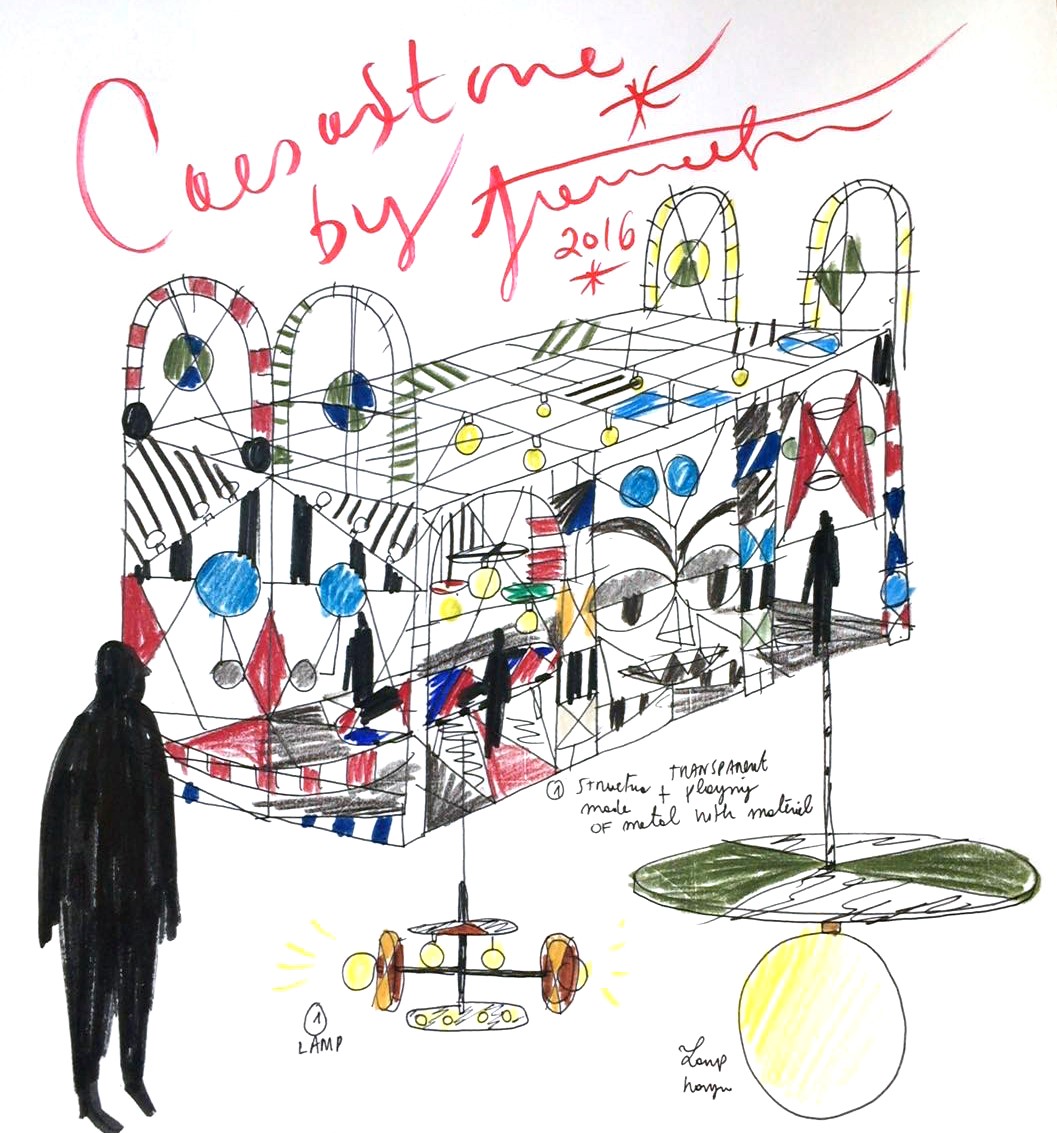 October 2016: Leading quartz manufacturer Caesarstone announces its collaboration with world renowned designer Jaime Hayon for their 2017 Designer Programme, which, since 2013, has pushed the boundaries of experiential design with work from nendo, Raw Edges, Philippe Malouin and Tom Dixon. The first installment of this year-long collaboration will be unveiled in January 2017 at the Interior Design Show, Toronto, followed by a major event during Milan Design Week in April.

Under the title of “Stone Age Folk” Hayon will use Caesarstone as a precious component of his whimsical universe inspired by Fauna – the natural world - and folklore. Blending fantasy with functionality, playfulness with craft and interactivity with cultural references, Hayon will create a kaleidoscopic, yet harmonic installation, which includes his signature smiling characters popping up throughout the space, alongside joyful carousels, wall panels, lights and tables.

The installation uses over 48 different Caesarstone colours combined with metal and glass, employing high-end traditional techniques of stone marquetry and metal crafting, elevating Caesarstone material to the luxury of a precious stone.

"People tend to see Caesarstone as a material that is only used in kitchens, but I looked at it from the viewpoint of an artist and designer. With this in mind, I wanted to create my own imaginative cosmos, using the brand's quartz material alongside other noble materials like glass and metal." Jaime Hayon, Designer

Entranced by Hayon's fantastic world and ability to combine different Caesarstone colours and materials in such an effortless, elegant way, we were inspired to work with him on a new collaboration that, drawing on the successful 2015 collaboration on the commissioned mask Face Mirror, will further demonstrate the beauty and strength of Caesarstone, whilst providing his own artistic, visionary interpretation.” Eli Feiglin, VP of Marketing at Caesarstone

About Caesarstone
Caesarstone manufactures high quality engineered quartz surfaces, which are used in both residential and commercial buildings as countertops, vanities, wall cladding, floors and other interior surfaces. The wide variety of colors, styles, designs and textures of Caesarstone® products, along with Caesarstone's inherent characteristics such as hardness, non-porous, scratch and stain resistance and durability, provide consumers with excellent surfaces for their internal spaces which are highly competitive to granite, manufactured solid surfaces and laminate, as well as to other engineered quartz surfaces. Caesarstone's four collections of products — Classico, Motivo, Concetto and Supernatural — are available in over 50 countries around the world. http://www.caesarstone.com

About Jaime Hayon
Spanish artist-designer Jaime Hayon was born in Madrid in 1974. His artistic vision was first fully exposed in the ‘Mediterranean Digital Baroque’ and ‘Mon Cirque’ installations. These collections put Jaime at the forefront a new wave that blurred the lines between art, decoration and design and a renaissance in finely-crafted, intricate objects within the context of contemporary design culture.Jaime further defined his vision in subsequent solo exhibitions and shows at major galleries, and design and art fairs all over the globe. His wide client base spans diverse functions and mediums, including domestic furniture for b.d. barcelona, Cassina, Fritz Hansen, &Tradition, and Magis; lighting fixtures for Parachilna, Metalarte and Swarovski; and sophisticated objects for Bisazza, Lladró and Baccarat. He has also executed complete interiors for leading hotels, restaurants and retail establishments worldwide. Jaime currently resides in Valencia, with offices in Barcelona and Treviso (Italy). His work has appeared in the most prestigious art and design publications worldwide. He has won numerous awards, including multiple Elle Decoration International Design Awards, included by Wallpaper Magazine in its "Top 100" list and recognized by the magazine as one of the most influential creators of the last decade, and lauded as a "visionary" and one of the most creative icons by Times magazine.